They Promised Us A Bright Future,
We Were Content With An Obscure Past 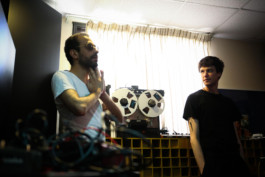 Behind the ironic-prophetic moniker of Good Luck In Death are the duo of  Parisian electronic producer Paul Régimbeau (Mondkopf, Extreme Precautions, Autrenoir, FOUDRE!) and  Lebanese artist and performer Charbel Haber (The Bunny Tylers, improviser in the Johnny Kafta's Anti-Vegetarian Orchestra, Scrambled Eggs' guitarist and  singer, and all 'round explorer of a new pan-Arab psychedelia with the ensembles Malayeen and Orchestra Omar).

The duo met in Spring 2017 when they were invited to join the free rock collective Oiseaux-Tempête for their AL-'AN! tour and  residency  at L'Autre Canal in Nancy. Charbel and Paul begun to improvise during the breaks at the residency, with resulting sounds growing and developing into those of  a common language. At the beginning of Summer they found themselves a home at studio Mer Noir in Paris, and laid down the tracks of their first album.

With the appropriately named 'They Promised Us A Bright Future, We Were Content With An Obscure Past'  Good Luck In Death delivers an almost anti-futuristic and dreamlike manifesto that juxtaposes   orchestrated minimalism against the luxuriance of dense melodic flights.  Processed guitars played with the e bow, synthesisers and analogue machines casting shadows of their lazy kinetic journey, a dialogue in the strata of vaporous ambience. The duo borrows in equal measure  from the introspective power-ambience of the most recent Mondkopf ('They Fall But You Don't' - In Paradisum, 2017) and the sensuous and crazy experiments of Charbel Haber's 'Of Palmtrees & Decomposition' (Discrepant, 2016). The musical drift blazing from East to West, the borders as blurred as the harmonies, modes, scales and emotions which give them shape and form.  And through the waves of electric haze,  emerging veiled from the dream, comes a  prediction, a premonition, a prophecy,  grainy and ecstatic, like a cloud of fire.

Charbel Haber is a Lebanese musician, performer, visual artist and composer from Beirut. His work has seen him collaborate with artists from a wide range of disciplines

As a solo artist and as a member of post-punk band Scrambled Eggs, he has composed music for directors Khalil Joreige, Joana Hadjitouma, Nadim Tabet and Ghassan Salhab, video artists Lamia Joreige and Akram Zaatari and playwrights Rabih Mroueh and Lina Majdalani, to name but a few. His prolific and collaborative career includes ambient duo The Bunny Tylers, free improv group Johnny Kafta Anti-Vegetarian Orchestra and psychedelic Arabic music ensembles Malayeen and Orchestra Omar. He is the founder of Those Kids Must Choke and co-founder of Johnny Kafta’s Kids Menu - two experimental record labels - and he has recorded and collaborated with notable artists from the fields of free rock, ambient and improv such as Oiseaux-Tempête, Mondkopf, Mats Gustafson, Eddie Prevost

The direction of Paul Régimbeau was set at the end of the 1990s while he still lived in Toulouse, France. A discovery of the first discs of Vangelis and Aphex Twin giving him the impetus to experiment and explore the possibilities of production software. At the age of 22 he moved to Paris, and the success of his remixes and first releases catapulted him to the heart of the French "electro" scene. A scene in which he quickly distinguished himself by his organic sense of melody. This success, however, hides a very different side, a far more introverted temperament and a deeper more intimate relationship to music as personal catharsis.

Mondkopf made his mark by an almost total immersion in extreme metal, a repertoire of sensations and emotions giving way to revelation. His album 'Hades' the voice of this  unprecedented synthesis  is a wave of electronic impressions and recreations of these textures, riffs and ferocity. The follow up, 'They fall but you don't' was described by The Wire magazine as "the only music that fits that once promising and much abused term power ambient: massive sharp-edged drones, slow lightning cracks of guitars, Tangerine Dream synths curling around one another, everything glowering with an inner intensity that still feels closely reined in."

As ever increasing evidence of his ability to transcend genres, his music takes centre stage not only at the most cutting-edge international festivals such ATP or CTM (in first part of Electric Wizard), the post-industrial hangars of  Northern Europe and the industrial evenings,  but also at the plethora of underground  events that straddle the continent (Berghain in Berlin, "Kaos" in London or at the Underground Village for the first part of Nurse With Wound). He explores the spaces and silences  of places of worship (St Merry Church in Paris), museums of visual art (Musée des Beaux-Arts of Brussels, the Parisian BAL) and classical concert halls (Cité de la musique in Paris, Auditorium de Lyon). A constantly  shifting array  of opportunities to surrender to the pure intensity of live performance, on a shared journey with an ever increasing and dedicated audience.

Introspection has, in the meanwhile, given way to multiple collaborations such as Charlemagne Palestine, guitarist Greg Buffier (Saåad) for Autrenoir, the post-rock band Oiseaux-Tempête and the Japanese black metal group VMO along with the American noise artist Pete Swanson. His meeting with the Lebanese guitarist Charbel Haber (The Malayeen, Scrambled Eggs, The Johnny Kafta Anti-Vegetarian Orchestra, The Bunny Tylers) marks the most recent stage of this ever evolving  journey  in contrasts.