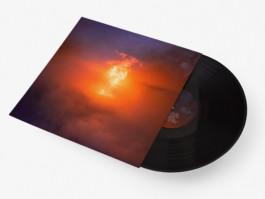 Phases of a journey beyond space-time, the six tracks of UZHUR's first eponymous album, summon as many post-apocalyptic visions as there are brains to imagine them. In a stream of total improvisation, everything that emanates from the sessions recorded by this mysterious duo feeds eminently organic matter, while giving voice to machines – and it touches a little more closely what makes us human. Sound engineers and musicians Jean-Charles Bastion and Romain Poirier are used to composing for pictures; here they have fun defining the contours. Upon listening to the album, you might find yourself thinking of the greasy doom metal of Khanate (XELON) where the unrestrained blows of drummer Arnaud Rhuth (Le Réveil Des Tropiques, One Second Riot) vituperate, the electric tensions of Ben Frost in the gushing of the modular synthesizer of artist/producer Mondkopf (GENUS), or the Power Electronics of Whitehouse or Greymachine in the discharges and the rumblings, mixed with a very particular grace, a poetry which takes its time to navigate the extreme and evoke moments of cinema. Then, amidst strange vocoder mantras, hissings and interferences, through the wire of settings and textures which interlock and startle, one might let himself be immersed in their film, and in a certain idea of disaster which extends its shock wave into the crevices of the spaces we live in.